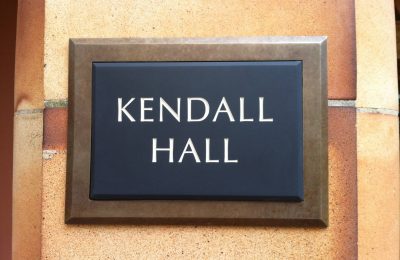 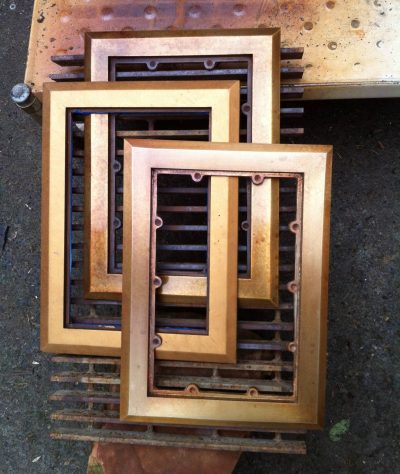 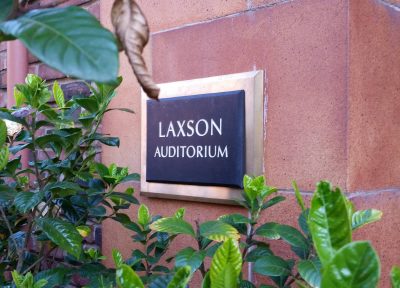 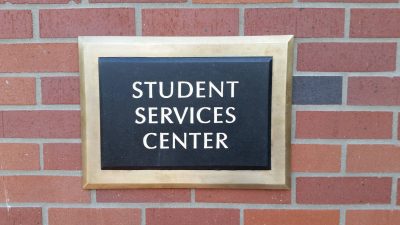 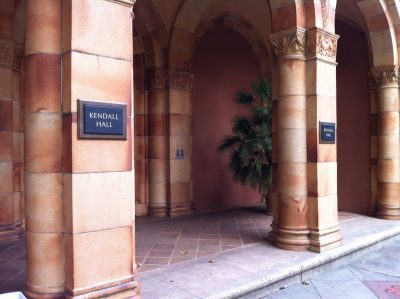 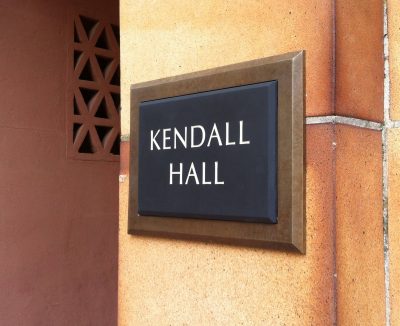 The bucolic, elegant University campus in Chico is the setting for one of the most beautifully designed building identity elements the Andrusko Group Studio has been involved in creating. It’s realization is one of the best stories of patience, persistence and no compromise. Principal artisan Pete Andrusko was able to work with one of the SEGD’s founding members, Jack Biesek, on one of his last projects. Jack was so cool to work with and he is seriously missed.

Appearances are sometimes deceiving: this simple, elegant-looking plaque is actually a very complex project to make happen – especially for something so classic, elegant, and simple to behold. It has been my experience that often the less complicated & simpler things appear, the more time and thought has likely gone into making it look that way. This project was no exception.

I got to know Jack Biesek through my involvement with the SEGD organization. He was a kind of legendary figure: both as an EG designer & as an applied artist/sculptor. We became friends – better described, perhaps, as more like a big brother. At one point he asked if I would consider moving to San Luis Obispo to work with him to learn how to be an EG designer. Sadly, at the time, I couldn’t see any conceivable way to make that work. “What if?” lingers in my mind to this day when I think about his generous offer. I was often invited to stay at his guest cottage and enjoyed many meals with Jack and his wife at their creek-side home in See Canyon, positioned only a few miles away from the fabulous Avila Beach Pier, which remains one of my favorite places in the world to walk and rest at.

This project is one of his last that we were able to collaborate on: a series of traditional, hand-carved black granite plaques framed in a custom-designed, cast & acid patina-ed bronze frame.

Jack approached me with the idea of creating a super elegant sign element for the Chico State campus. Nothing existed that fit his parameters, so we started with the idea of designing a custom bronze frame to hold and support a hand-carved stone plaque.

After working through a series of complex issues, I was able to create the model for a cast bronze frame that was hand-finished and heat-etched with acid to create a beautiful patina. The frame was designed with a unique pin system that allowed the panel to be inserted into the frame in a way that created a hidden, secured mount to the wall and no visible fixtures to hold the stone. The original plan was to use a black slate panel. Two prototypes were mounted into one of the historic campus buildings and left to weather for a few years. When it became apparent that the slate was weathering poorly, a decision was made to use a honed black granite instead. The granite was far more successful as a material & one of these early tests was produced for a friend of his who owned a cafe in the area: the Grenada Bistro.

The project specifications were eventually drawn up and the project was submitted in an open bit format through the University. Jack sent me a copy of the specifications he had assembled that was submitted to the Campus Architect. My name was listed in the vendor section at the end of the document. Typical enough, but what took my breath away was that he had written under my name and contact information: “No Known Equal” which is something I had never seen added to a document like this before. I was flattered. Not sure I merited that kind of a descriptor, but super happy to have it: especially, coming from Jack.

Fast forward 3 or so years.

Sadly, at this point, Jack had passed away from a lengthy battle with cancer. His very capable design team of friends, colleagues, and collaborators carried on his work. In the meantime, I was taking calls periodically from many of the best sign makers in California, as well as others asking about the plaques. There were larger firms bidding too & based on the extended time frame, I had pretty much given up hope that I would ever see this project with Jack realized on the Chico Campus.

About that time, I began hearing from Jack’s friends that the project was still alive and that I should have patience. Apparently, just about “everyone” in the sign-making industry had taken a shot at this project spec. and literally, no one was able to reproduce the quality of Jack’s design intent. Cool. Eventually, the project landed at my door and about 40 of these beautiful jewels have been produced and installed around the Chico State Campus to date.

So,… Jack’s statement of “No Known Equal” in the design spec.’s ended up as a prediction that turned out to be true. I’m 100% happy about that. Can’t tell you how good that feels.

I was fortunate to be able to work with him on a few projects during the time he was active with SEGD, I’m particularly proud of this project – I really value the time we had as friends and the opportunity to work together with him and his talented team of friends.