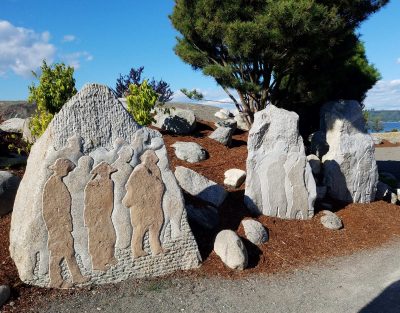 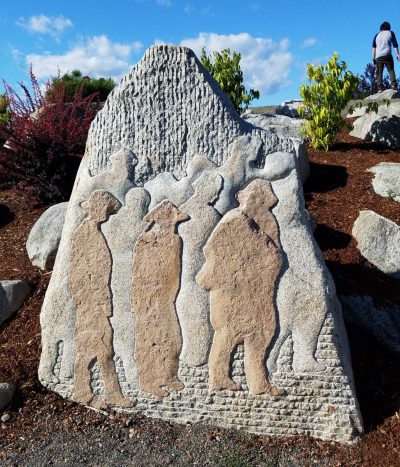 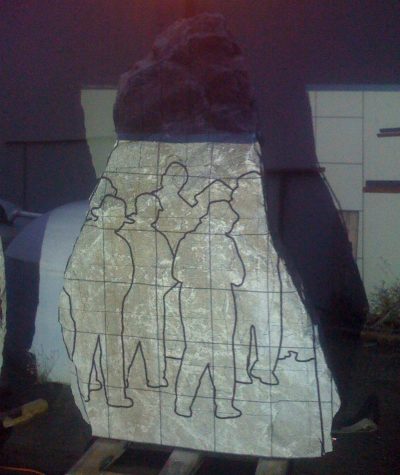 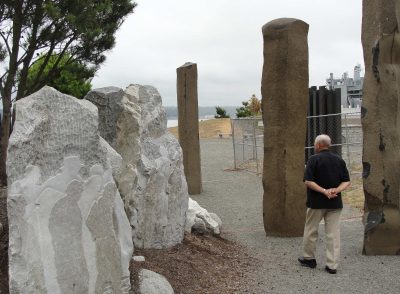 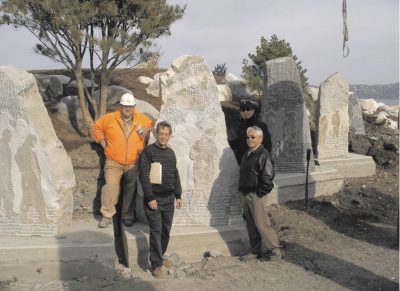 The Chinese Reconciliation Park informs us of a terrible instance in our history where immoral, unfair, and harsh legislation was enacted against those who were innocent of a crime. Through the legislation that was put into motion, a community that should have protected its citizens slouched into what can only be described as real crimes against humanity by an unfortunate few who embraced and enthusiastically implemented an immoral act against those innocent, unnamed souls whose profiles are depicted in these stones as they are driven out and forced to leave their community.

This was an especially challenging project that involved sourcing over-sized materials for the largest stones which involved a number of quarry visits in various parts of BC, Canada as well as driving around to various sites in OR, WA, ID, and MT; once the stones were located and approved there were some fairly challenging logistical issues to get them from the principal site they were finally located in near Spokane, WA to my Studio in OR. Once I had them, I had to cut and mill the bottoms in order to stand them up safely for viewing and carving, the 2 largest of the collection of a dozen stones were in excess of 20,000 lbs. each.

These two massive behemoths were the most difficult to find and still weren’t actually as large as the architectural spec.’s were calling for. Ironically, after finally finding them, purchasing them, finding a way to get them to my studio and off loaded (Crane), then bases cut, sturdy enough support stands built for them to stand erect and then specially erected and placed into position (crane again: the stones were placed vertically into position on the specially created stands), the designer belatedly realized they were simply too large for the site and rejected them. Ouch! Good thing there was a backup plan that involved more stones to select from.

The designer and I used a visual projector to place the proposed sketches onto the stone surfaces, where the images were traced onto each stone and marked for carving. There were three levels of figures in each of the stones in addition to the foreground and background. The background was cut into the surface of the stone using vertical lines, the foreground used horizontal lines. The layers were differentiated between the natural surface of each stone, a sequence of bush-hammered surfaces, and finally, a honed layer creating a visual pallet of depth using textured surfaces.

The stones were loaded up and driven to the site for installation with another crane. The logistics of projects of this kind can be complex given the vital choreography needed involving so many moving parts, any one of which – going wrong – could cripple the installation. Fortunately, everything worked as planned and the installation was completed without a hitch, witnessed by the designer and the project architects.

To do the carving of these silhouettes on the large granite rocks, we brought on Peter Andrusko. Peter is a friend of the SEGD who specializes in architectural applied arts involving stone materials.

He not only brought to this project his unmatched technical knowledge of working with stone and his classic stone carving artistry, but also his willingness and receptiveness to work with the design team to pull off such a sensitive and important part of this story.

Peter Andrusko not only met the challenge but he exceeded the expectations of this project.