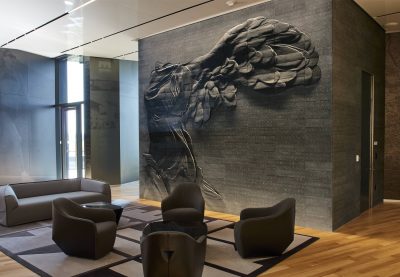 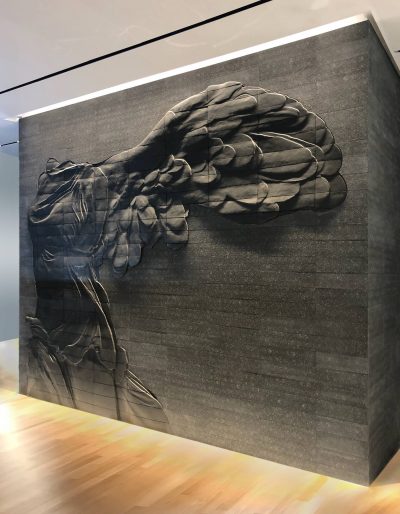 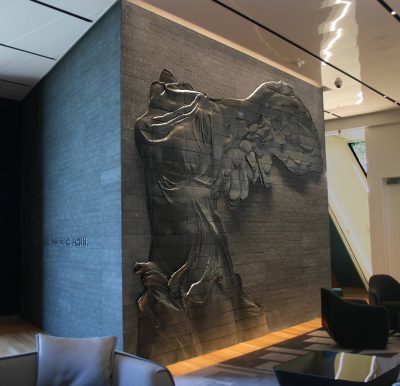 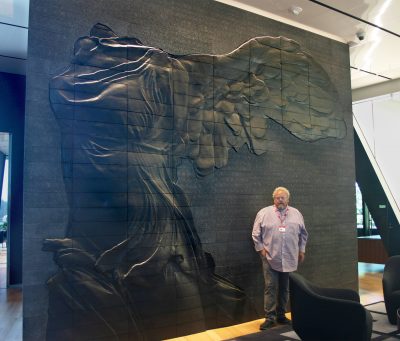 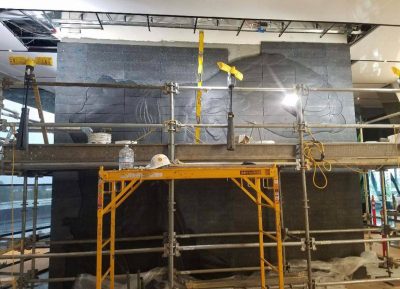 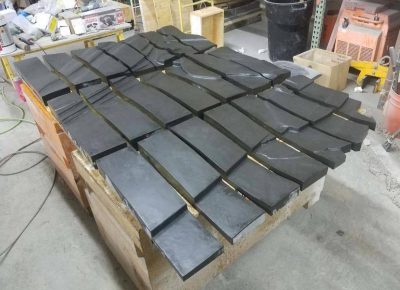 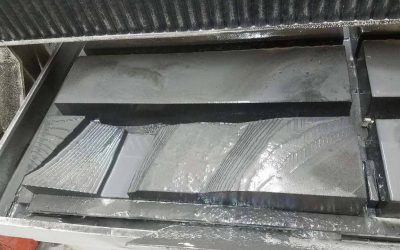 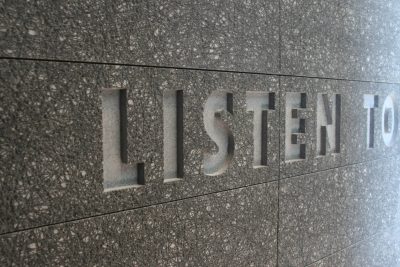 The NIKE or WINGED VICTORY sculpture is likely to hold its place as a singularly important commission in the Andrusko Group portfolio, as well as representing a decisive artistic & technical achievement by the founding, principal artisan. The colossal stature and beauty of this work – & in particular, the complex nature of the technological applications developed and perfected in order to achieve it, performed by a single artisan in a matter of months, working alone – makes its existence incredibly satisfying.

The realization of this massive, black basalt bas-relief sculpture of the iconic winged goddess of victory has generated considerable interest. It is far from being the largest or most prestigious commission my studio has taken on, but it is by far the most complicated and technically challenging.

In May of 2017, I was approached by the special arts projects PM at Hoffman Constr. Co. (one of the NW’s premier commercial builders) and began a dialogue about the viability of creating a massive stone bas-relief sculpture which was being proposed for the executive boardroom of a local, Oregon-based Fortune 100 company.

For those of you who don’t recognize this image: it is inspired by the iconic & eponymous NIKE or VICTORY at Samonthrace sculpture currently located in the Louvre Museum in Paris, France. The original is white marble and about half the scale of this wall sculpture. This work is constructed from a very hard, dense, and brittle local black basalt and which was then inlaid into a field of water-jet textured Italian Black Granite tile. There is also some lettering carved into the granite which is also the product of my studio and hand.

The sculptural elements are fabricated from a local black basalt stone from the Moses Lake, WA area – a ubiquitous Pacific NW material in various colors, textures, and forms that covers vast amounts of Washington, Oregon, Idaho, and British Columbia – probably stretching into Montana, Nevada, and Northern California. In this particular case, it’s an amazingly tight-grained satiny black that takes a polish. I worked with a local stone company that cut the rough blocks to size and supplied the slabs which were then cut to fit in my studio to the super-tight specs needed for the project.

The core block dim. is 3 inches x 6 inches x 24 inches. Of that overall depth, the carving is actually contained within just 2.5in of depth and is then inlaid into the graffiti granite paneling covering the wall. Overall the sculpture is about 15ft tall and 18ft Wide. Est. wt. of stone – 7,500#

There are more than 300 parts in the finished work, many of which are first roughed into shape with CNC robotics technology and then each pc. is hand-finished and fitted into the cut-to-fit granite. It is a process essentially similar to the one used by many stone carving studios throughout time: in this case using robotic machines instead of human praticien, such as those famously employed by Rodin in his studio, to perform the roughing from the original models, in this case, digital files.

This project makes me happy. That this now exists in the physical world where others can experience it, makes me very happy. Everyone should own a win like this. It’s really very awesome.

Hi Peter,
I just wanted to thank you for such outstanding work! Absolutely beautiful.
I know you were against all odds, but you made it happen.
I had the pleasure of seeing the work firsthand on Friday, I was truly speechless.
I hope you are proud, you should be.

The superlative-laden emails I got from the client, GC, and others made me blush. Delivered on time, on budget, with zero punch list items to address. Tough to beat that! and now I own something that can’t be taken away. Mostly, I’m just grateful to have survived the experience and lived to tell the tale.

This private client’s creative & legal team wishes to remain unnamed for their own reasons, so I will respectfully honor their wishes and would further like to express to them my gratitude for allowing me to show images of the work and claim credit publicly for the creation of something truly worthy of the path I chose to take in my professional life many years ago.