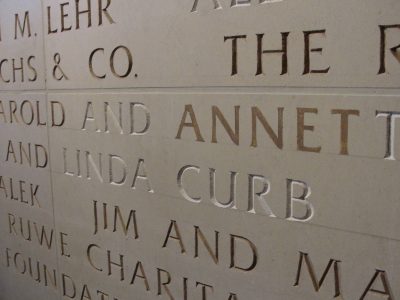 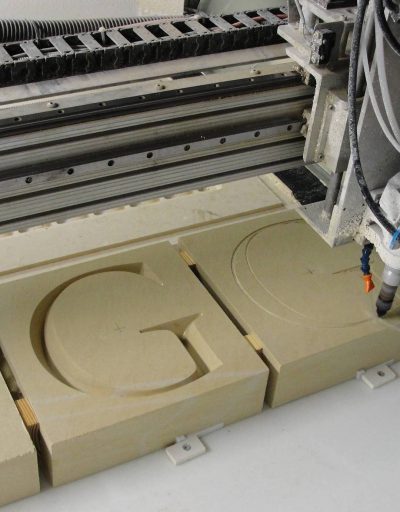 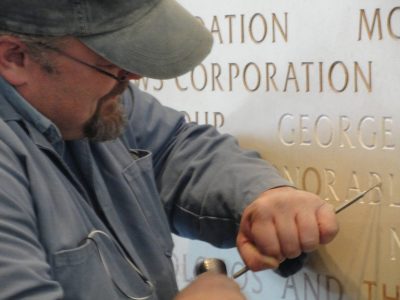 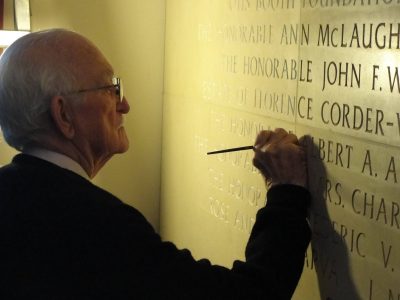 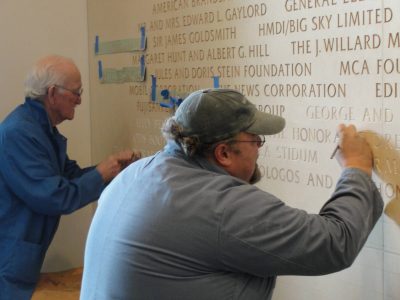 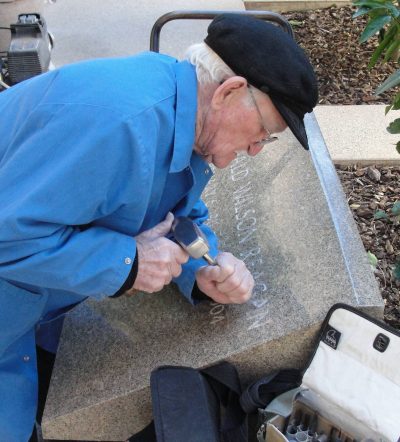 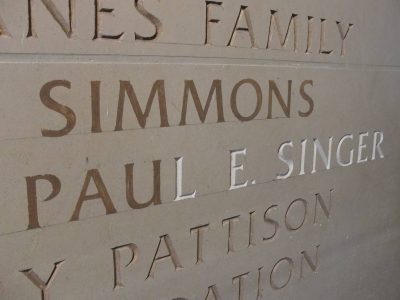 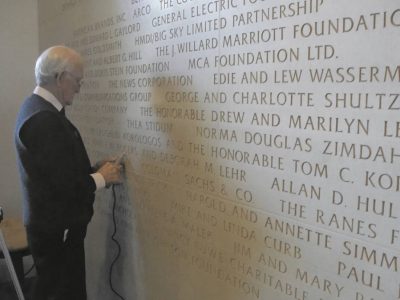 Rarely is a letter cutter privileged to be involved with & entrusted to carve on a project as prestigious as a presidential Library. In 2010, the principal artisan of the Andrusko Group was approached by the design team at the Douglas Group in Houston, TX to develop and supply the Robert A.M. Stern architectural team commissioned to design the George W. Bush Presidential Center, with a complex series of prototypes to evaluate the proposed letter forms to be used for the project. Later that same year, the lead carver working at the Ronald W. Reagan Presidential Library, Mr. Nathan Blackwell, asked Pete if he would be available to assist him in preparation for the 100 year anniversary of the former President’s birth, as a Guest Carver. Absolutely! What an honor.

In 2010 I received a phone call from one of the lead designers with the Douglas Group, based in Houston, TX. They were working with Robert A.M. Stern’s NYC Architectural office to develop the stone carving spec. for the new George W. Bush Presidential Presidential Center to be located at the Southern Methodist University in Dallas, Texas. Texas Creme Limestone.

Yeah,… that was a very cool phone call to get. I ended up with the commission to help develop the carving specifications for the project and was also asked to submit a bid to perform the work. Unfortunately, I did not win the commission to perform the work on site. That honor ended up in the hands of another carver who had a prior relationship with the General Contractor. The samples were produced in triplicate: one set to the architects in NYC, one set to the GC in Texas and the final set remains in my possession as a control, which is often done for complex & important projects that take a long period of time to be completed in order to make sure expectations are properly met.

In late 2010 I was approached about work on another Presidential Library. In early 2011, the Reagan Library located in Simi Valley, CA celebrated the 100 year birthday of President Reagan. A dear friend & colleague of mine: Mr. Nathan Blackwell (a dapper, 90+ year old hailing from England) had been commissioned by the Library for a number of years to perform the carving of donor names at the library. The birthday celebration involved a considerable number of names to be carved in a short period of time. Nathan asked me if I would be available to assist him in completing the tasks prior to the formal events scheduled at the Library. Of course, I was thrilled to be asked and made it a point to be available as a guest carver for a few weeks early in the year.

While I was carving, I happened to mention to one of the Library Docent’s that I was present in West Berlin at the Brandenburg Gate when President Reagan gave his historic & famous speech that was heard around the world: “Mr. Gorbachev, tear down this wall!” – also known as the Berlin Wall Speech, which was delivered June 12, 1987. I had just graduated from university and was working as a post-college intern at that time working in Berlin along with a fairly large group of recently graduated AIESEC members/friends, which is an international student group I was very involved with during my college years. The Docent very generously offered to send me photographs from this event that were contained in the Library archives. Most of the photos I received were of the attending crowd taken from the stage. We were given invitations to attend from the US Consulate, so it was a closed and controlled event. I have looked at the digital images, which presumably would show me in the gathered crowd at the event, unfortunately the digital film appears to have been taken with 35mm film, which I suspect is far too small to hope to find any pictures of me or the group of friends I was with. At least, so far. But, how cool would that be?

A few years earlier, after attending a SEGD national conference in Wash. DC. I spent most of 2 full days exploring the National Cathedral, which is a beautiful Indiana limestone edifice situated in a quiet DC neighborhood. The Cathedral contains an incredible amount of artwork including the famous sculpture “Ex Nihilo” by Frederick Hart, which was placed above the main entrance. President Reagan passed away in California while I was walking and photographing the stonework in & around the Cathedral and grounds. I remember the many deliveries of security fencing delivered to the site during the second day of my visit, as the National Parks Service readied the building and property for the funeral that would be held there later that week.

While tasked with carving donor names in the lobby of the Library in 2011, Nathan had the additional task of re-carving President Reagan’s headstone. The original had been carved from Indiana Limestone and had not weathered well, even in sunny California. The new headstone was cut and polished granite, a far more durable choice. Nathan generously offered me the opportunity to take a few swings with the hammer to carve for a minute on the former President’s headstone. What an honor.

The year I graduated High School (Sunset High in Beaverton, OR – sometime, perhaps, in May or June of 1980) a mock political convention was held at the Portland Colosseum for High School students from all over the Portland area. I remember that then President Carter was scheduled to visit, as was the opposition candidate nominee, Governor Ronald Reagan. Governor Reagan showed up and spoke to Colosseum full of curious students. President Carter was – unfortunately – a no show for us.