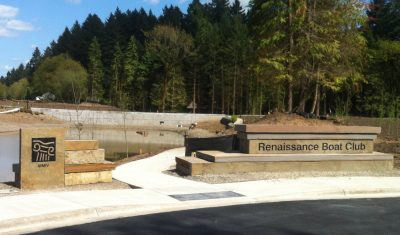 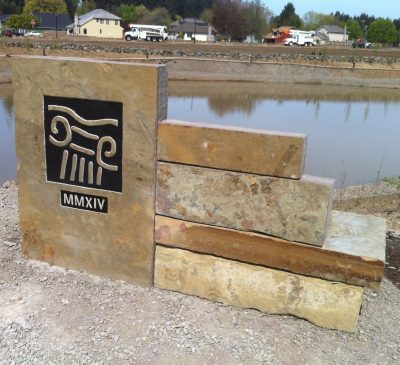 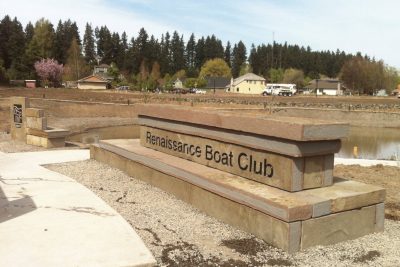 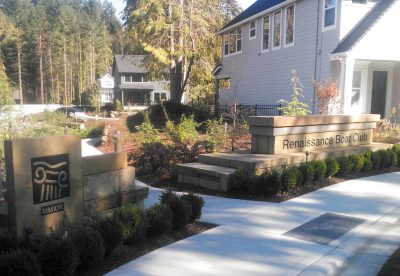 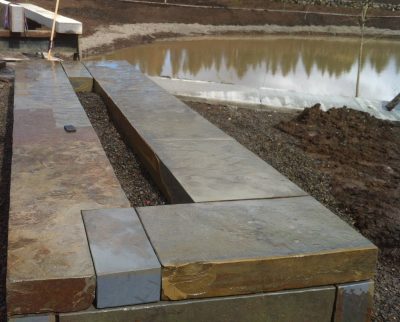 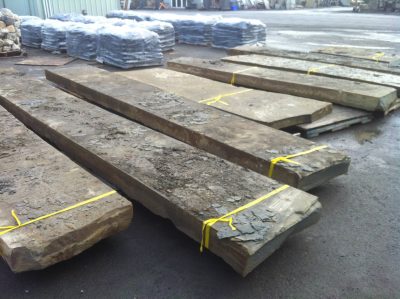 From the late 1990s until the economic collapse of 2009, which effectively killed the home-building boom for many until recently, the Andrusko Group Studio was primarily involved in the design & construction of sub-division monuments for production builders active all over the Pacific NW. In fact, over 500 monuments were designed and built-in locations from Southern Oregon up to Puget Sound. In addition to the monuments for HOA’s, there were many similar signs and monuments made for commercial clients and multi-family projects. A secondary activity that ended up being even more important to the work of the studio was numerical identification: individual address plaques, suite or room numbers, and other smaller forms of branding or identification were literally produced by the thousands fashioned from stone, wood, and metal.

One of the few monuments that the Andrusko Group has built since the home-building bust of 2009 is located in a beautiful enclave along the Willamette River near Willsonville, OR for one of the most prolific and award-winning home builders in the area: Renaissance Custom Homes. The Andrusko Group has partnered with this premier builder on dozens of beautiful monuments for more than 20 years and is proud of the collaborative accomplishments achieved with this amazing building team.

This monument is really unique and amazing. A few years earlier, I was commissioned to build another monument for an apartment complex in Vancouver, WA – Millennium Park – from a large sandstone material recently introduced from a Utah quarry. I noticed it had some very unique properties while it was being worked, that I had never before encountered: it was resilient, meaning it had the ability to bend and flex considerably without breaking: not something one normally encounters in a natural stone. What made this material even more unusual, was that it was showing up in slab lengths unheard of: in excess of 23 feet long, 5-7 inches thick, and 3-5 feet wide. Astonishing. When I was approached by Renaissance Custom Homes to design a new monument for the Boat Club HOA, I showed them pictures of the completed monument in Vancouver and photos of the stone slabs at the yard with these amazing dimensions. They were as excited at the possibilities as I was and agreed to my design of long, continuous slabs making up a very craftsman-like assembly of stone.

The only problem was they didn’t have the budget to work with we had become accustomed to during the building boom. Life was decidedly different for all of us after the bust. Given the unique attributes of the material, I suggested we could save a dramatic amount of cost by losing the concrete footing that would normally be used to support such a massive monument and consider constructing the entire monument mortar-less. The idea would be to use compacted gravel, coarse sand, rubber pads, Geo-fabric, and stainless steel pins to assemble the entire monument. I had never seen anything like this done before at this kind of scale, but I developed a plan that was approved for construction and went to work building it from these unusual, monolithic slabs. It turned out fabulous and has proven to be sustainable and as you can see, it fits beautifully into the environment and aesthetic of the HOA. This entire monument from the cutting of rough slabs, to delivery to the job site, to installation and construction, including all of the carving, which is traditional V hand-cut lettering was performed in studio and on-site by the principal artisan, Peter Andrusko.