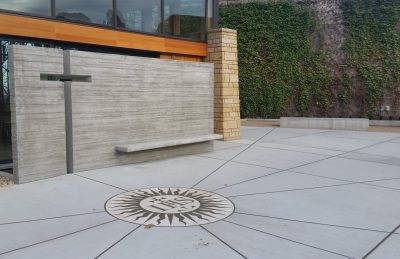 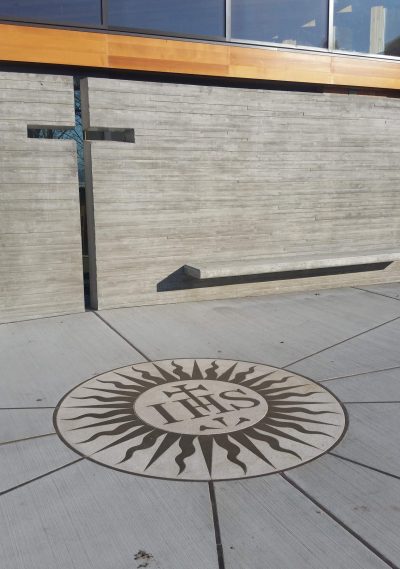 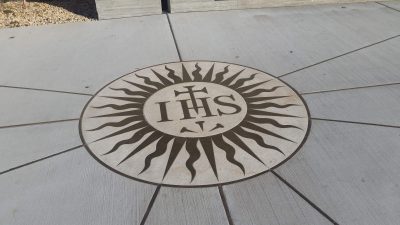 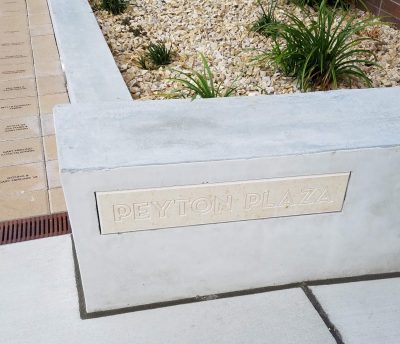 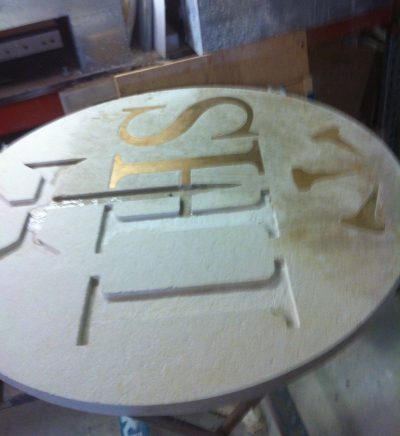 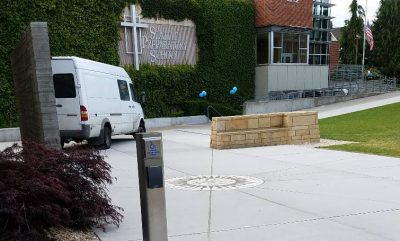 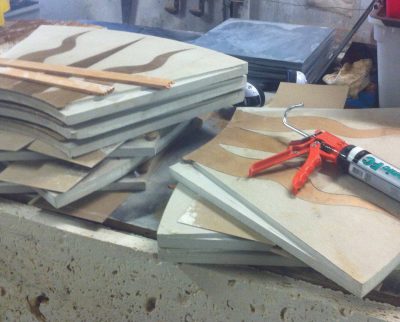 The architect firm of Hennebery Eddy approached the Andrusko Group Studio about creating a very unique assembled medallion for the Seattle Preparatory School in 2014. This Jesuit medallion design was to be a stone and metal inlay placed in the central plaza area of the school, principally constructed from cut bronze plate and limestone elements fitted and inlaid into the concrete pavement. This medallion is a replica of an ancient sigil of the Jesuit order with hundreds of additional linear feet of inlaid bronze strip radials emanating from the medallion & within the shadow of a cross created by a void in the adjacent wall, separating a baptismal fountain pool from the main plaza.

This project was commissioned by the local Portland firm of Hennebery Eddy Architects, Inc. which was primarily to execute a fairly complex, traditional Jesuit Order Crest design into a stone and bronze medallion that was inlaid into the courtyard of a Seattle Preparatory High School, a private Catholic School just outside the boundary of the Northeastern corner of downtown Seattle, situated on a bluff overlooking the main University of Washington Campus.

The open-air plaza is poured concrete surrounded by campus buildings and manicured lawns. The medallion is located in proximity to a cross-shaped void in the wall next to the campus Chapel. The plaza is additionally filled with radial lines of cut and inlaid bronze converging on the medallion.

The bronze elements are water-jet cut 0.25in thick silicone bronze plate and have been carefully worked & hammered by blacksmiths to texture and antique the exposed surfaces of the metal. The stone components are CNC cut limestone cut and played at the Andrusko Group Studio and were installed and fitted at the site by the owner of the Andrusko Group, Pete Andrusko.

In addition to the medallion and radials inlaid throughout the plaza, there is a small stone carved honorific with the name of the park carved in limestone and a later addition of a custom-made railing in bronze commissioned to prevent visitors & parishioners from stepping off the walkway into the baptistry area just outside the Chapel entrance. The bronze casting is a custom pc. designed by the Andrusko Group Studio and custom cast & finished by a local Portland foundry.