A true story about one final act of kindness to a stranger by Mr. Dan X. Solo 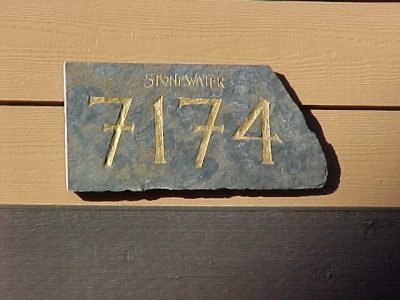 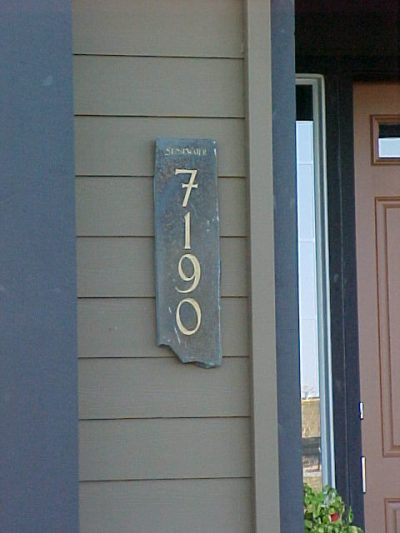 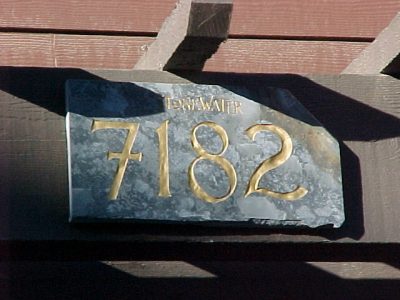 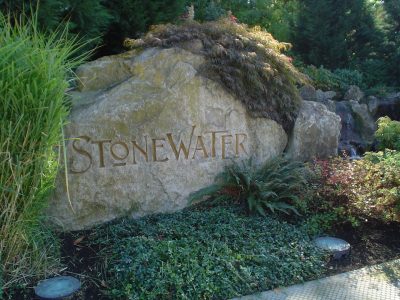 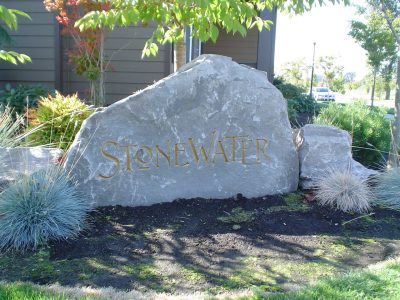 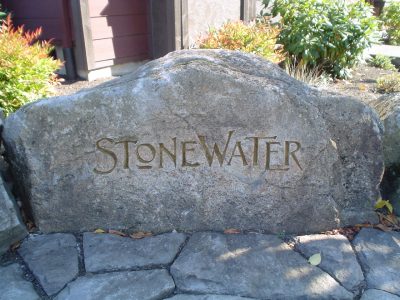 This project study is actually a story about Pete’s first direct exposure to creating typography and the extraordinary circumstances that led up to the achieving of a unique solution to a client’s need. This wonderful story comes about as a result of genuine, natural human kindness & touches on the search of one amazing man for satisfaction in life.

Early in the 2000’s I was commissioned to work with one of the Pacific NW’s premier landscape design firms – Rittenhouse Tomiyasu – to perform the stone carving for a major residential development in Hillsboro, OR – located in the heart of Oregon’s silicon forest. One of my first rustic stone-carving commissions of significance.

The team was looking for a distinct, iconic “craftsman” feel for the identity being created for this new residential high-end development – they were seeking to use something of a more rustic, traditional, hand-carved letter form, cut into the natural stone of the boulders selected for the various entry points into the development.

As you can imagine, a vigorous hunt for the perfect-looking letter form was undertaken. The inspiration for which – eventually – centered around a typeface named Lightfoot, which was located in one of the ubiquitous, open-source, Dan X. Solo books on typography prevalent in pre-Internet days. I still have and use many of his catalogs, which I’ve collected & house in my resource library, most of which resources were found during my happy book-buying excursions in Portland’s iconic Powell’s Bookstore.

The client loved the look of the series of rustic carved stones throughout the development so much that they quickly inquired about using stone address plaques for the homes & common area buildings in the HOA. Unfortunately, this particular typeface didn’t include numerics or any special characters. This presented a serious problem. Keeping in mind this time period was still the infancy of the internet and I’ll also admit that my personal skills at typography were severely limited by lack of experience.

The primary source of available design options at that time was limited to print resources contained in my well-outfitted design resource library or – option 2 – hunting through some of the local & national bookstores which still dotted the landscape around Portland at that time. The hunt was on! Ultimately, there was no joy in finding any numeric designs that would fit the design aesthetic of the Lightfoot typeface. After hours upon hours of fruitless searching for a number set that would match up, I discovered a short description of the Solo type firm in one of his books with a description of how the owner and some of his team would travel the world every year to explore & discover new typefaces to add to their published collections of typography. I felt confident that I had exhausted all other options & decided to make a “shot in the dark” call to the Solo Type office might yield a solution to locating the elusive digits. Perhaps they had a number sequence for Lightfoot that hadn’t yet been published? So I made the call. Something only a novice would do, right?

Mr. Solo answered my call. Personally. He was polite, listened and when I had explained to him what I was after, his reply startled me: he informed me that he was retiring in less than a week, had closed his business, and would be unable to help me with my request. He related to me that his passion was magic and that he and his wife were looking forward to spending their remaining years performing and traveling. Not at all what I would have expected to hear. But, ok.

Then – out of the blue he offered me a solution that in my wildest dreams I wouldn’t have expected or thought to ask of him: he asked if I was available to speak with him for a few minutes longer? When I had agreed, he launched into an approx. 30-minute explanation of how to create a serviceable 0-9 numeric sequence extracted from a std. capital alphabet. I took notes as he spoke. Later, with his invaluable instructions and generous advice, I created the numeric sequence that his Lightfoot typeface and explanation had inspired. The client was thrilled with the finished result. I subsequently produced literally thousands of address digits and plaques during the 2000s using these special digits.

Out of curiosity, I recently did a web search of his name and discovered that he passed away about 10 years ago. I don’t remember exactly when the date of my conversation was with him, but I’m guessing at some point around the early 2000s maybe as late as 2004. I have records of the work I was doing, so it would be fairly simple to track it back & I suspect in my files someplace is a record with my notes and probably even the working files I used to develop the artwork for the digital numeric files to get to the Numeric’s for the address plaques.

I also found another obituary of his wife’s, which further filled in the details of the accuracy of my memory. His obit doesn’t mention the magic I remember him telling me he was retiring to focus on, while hers does and actually gets into some detail about it. They spent the last of their years living their dream traveling on cruise ships doing magic together. An amazingly cool intersection of lives; I was most grateful that I was able to get a solution to a problem, but I now find myself smiling with the memory that I somehow had the temerity to make that kind of a call in the first place. The more subtle truth is Mr. Solo was a generous man with me when he really didn’t need to be – it’s very cool that he would take the time with me to explain how to get where I wanted to go. Because of his willingness to take time with a stranger; because of his kindness and to a lesser extent, my gumption, something exists in the world that up to that point had not – no matter its minor significance in the grander scheme of things, it’s part of the weave of life and a definite ripple of two lives interacting in a tangible way, even if for a brief moment. A cool story results…