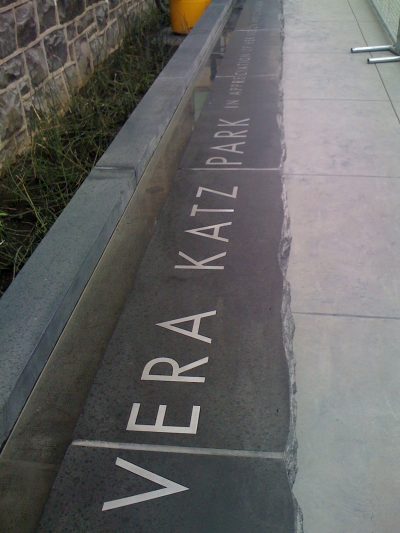 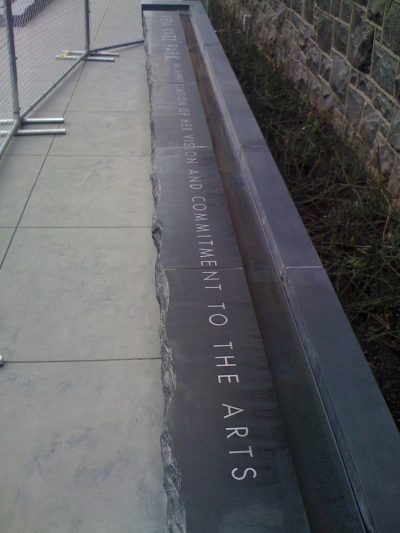 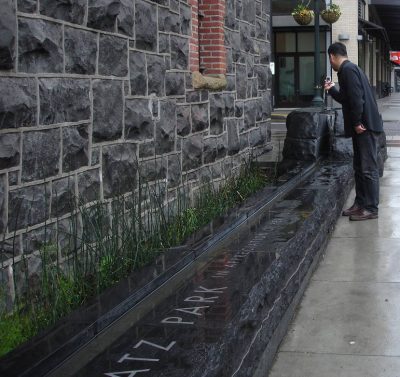 One of the smallest public parks in Portland is known by a variety of names: Vera Katz Park, Sliver Park & the Armory Building Theater Park. It is a beautifully designed basalt fountain with a long water runnel through most of its length. It is surrounded by landscape plantings & benches that provide a welcome, cool, shaded rest for the few weeks of warm, dry weather Portland enjoys each year. The Andrusko Group was commissioned to engrave and inlay metal lettering along the fountain runnel edge as an honorific for one of Portland’s former Mayors.

This project at Vera Katz Park (also known as Sliver Park) is located in NW Portland a few blocks away from the famous Powell’s Bookstore along the side of the Armory Building Theater. It was designed by Scott Murase of the Murase Studio, now based out of Seattle. The text portions of the honorific to be carved & inlaid into the stone were developed by Anderson Kreiger (now, re-branded as KNOT) an EG design firm based in Portland.

The process involved a masking material that is the same as is used for sandblasting stone. The initial engraving began with a deep sandblasting, followed by high rpm hand tools that are similar to the diamond drills used for dental work. The cavities needed to be excavated in order for the stainless steel inlay to be inserted are always slightly larger than the metal alpha elements to allow for the metal to move and expand in various temperature ranges without spalling or damaging the edges of the stone.

Once the cavities were properly excavated and the metal letters fitted into each of the cavities prepared to receive the alpha elements, they were dried and the metal was inserted with a flexible adhesive that would keep the metal solidly in position,  leveled up to the top surface to be perfectly flush with the plane of the runnel.