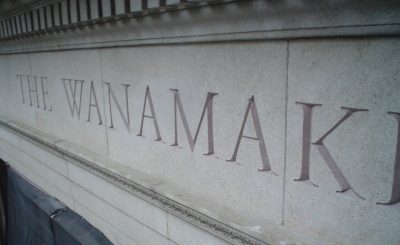 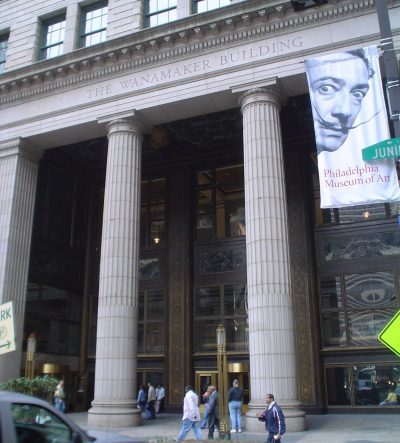 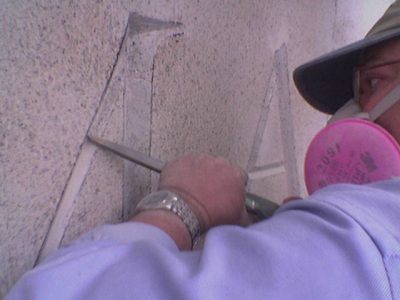 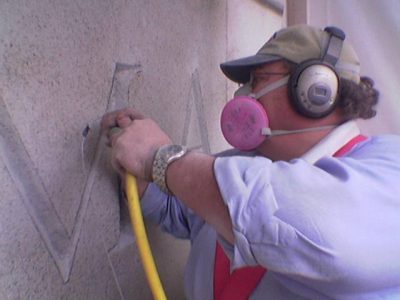 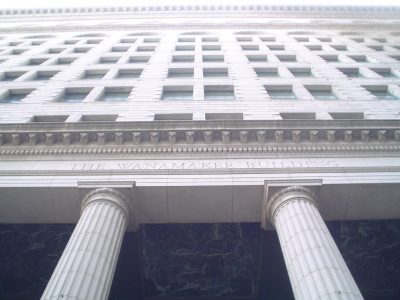 The street view belies the colossal size of the letter form (nearly 20 inches tall) used to create the text of building identity, which was direct-carved into massive 4ft x 8ft blocks of granite that make up the architrave of this classically inspired building.

This massive Classical Greek edifice continues to be a prominent feature in Philadelphia’s famous Penn Square, the rectangular boulevard surrounding their famous City Hall building iconically capped by a statue of William Penn.

The Wanamaker Building, built in about 1905, is a world-famous landmark with generations of American Holiday Shoppers familiar with its famous bronze eagle, massive pipe organ, beloved Christmas light show, and festive decorations. The building has also featured in many well-known films and even includes an inlaid star & plaque commemorating the building’s dedication by a sitting US President. Pete received one of his most treasured compliments at the conclusion of this work.

Pete was approached by the architectural firm Hillier to perform direct carving into the classical Greek facade of a historically registered building of prominence on Penn Square in Philadelphia, PA. The Wanamaker building had been re-purposed into a mixed-use building: Retail and Office by the new building owner. It was the desire of management that this entrance has its own unique identity, which was originally planned for but not executed when the building was designed.

This building was designed and built in the early years of the 20th Century to house the prestigious Wanamaker Department Store. Although it was built in the classical Greek style, it was constructed with what was then the newest modern architectural technique of iron girders, with the building then clad in traditional cut stone. No pressure, right? City Hall was literally at my back where the Historical Commissioner’s office was located, the Architect’s office was located literally at the Mezzanine level next door to my right at eye-level and the building management was ever-watching every move with eager anticipation.

Given the nature of the task – namely, carving nearly 20 inch letters directly into the granite stones making up the building’s architrave, being hand-cut across more than 35 feet of the original nearly 4ft high x 8ft long granite blocks – many others were involved in the project in addition to the architects, including the building owners, the City, the Historical Commission and a special team who were hired to create a protective environment under and around the area where the carving would take place approx. 60 feet up from street level, working from inside a specially modified articulating high lift cage using rubber boat bumpers along the front of the safety cage to allow the work platform to be nested up against the building face to keep it from swaying & a covered roof to protect the occupants from the inclement wind & rain that is typical of February and March.

The entirety of the carving was completed in approx. 2 weeks. The first step was to physically lay out the letter forms across the front of the building, developing the letter placement to optimally avoid or use the seam breaks between the stones. Once that task was completed, the architect and other stakeholders inspected the placement at street level and approved the carving to be done.

The next step in the carving was to mark each of the stones with a sharpie marker and remove the adhesive letter forms placed on the stones. After marking an angle grinder was used to rough cut the voids and begin to form the V-carved geometry of each of the letter form shapes. The shapes, once rough cut, were then further refined with pneumatic and hand-held chisels to achieve the final, precision angles that make up the traditional letter form.

Given the unusual site conditions involving pedestrians entering and exiting the building under our work area, literally everything needed to be tethered and secured to prevent any dropped tools in such close proximity to a civilian entrance at such an important building.

In addition, the movements and working in such a public environment at such elevation required a carefully choreographed sequence for the planning of the work day. The day started with retrieving the tools and equipment needed from a secured area in the basement of the building. All of that gear would need to be deployed daily and carefully monitored because of the location of the site on Penn Square on a publicly accessible sidewalk. Street crime and random violence, even in the early 2000s, weren’t insignificant in Philadelphia. I scheduled a short break for lunch at which time the tools were re-secured, needed facilities used, and usually a walk down to the amazing, covered food market Philadelphia is famous for. After lunch, the routine was repeated to complete a 2nd session of carving at 60ft elevation.

At the end of two weeks, with the carving pigmented and the architects and stakeholders present, we took a stroll about two blocks up the street to view the result together, where I received one of the best compliments of my entire career  from the architect: “Pete – Great job, it looks like it’s always been there.”